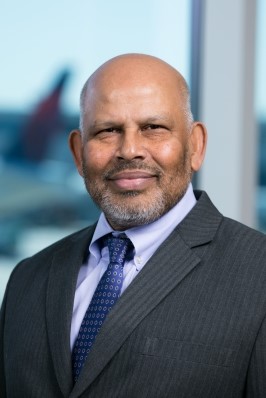 Balram “B” Bheodari Airport General Manager Hartsfield-Jackson Atlanta International Airport (ATL) As leader of the world’s busiest and most efficient airport, Bheodari oversees all facets of Airport governance, including operations and a multibillion-dollar capital improvement program designed to pave the way for Atlanta’s growth over the next 20 years. A retired Army aviator, Bheodari navigated ATL through the most challenging period of the COVID-19 pandemic. He has an extensive career in aviation executive management. Bheodari rejoined ATL’s leadership team in 2016 after serving as the chief operating officer for the Houston Airport System (HAS). Prior to joining HAS, he served more than three years as ATL’s deputy general manager. Bheodari previously served as deputy assistant general manager for Operations, Maintenance, and Security. Bheodari graduated from Troy University with a Bachelor of Science degree in aviation management. He also completed the Emory University Exe